Holocausto Canibal is deeply proud to be one of the first Warwick official endorsed artists in Portugal! 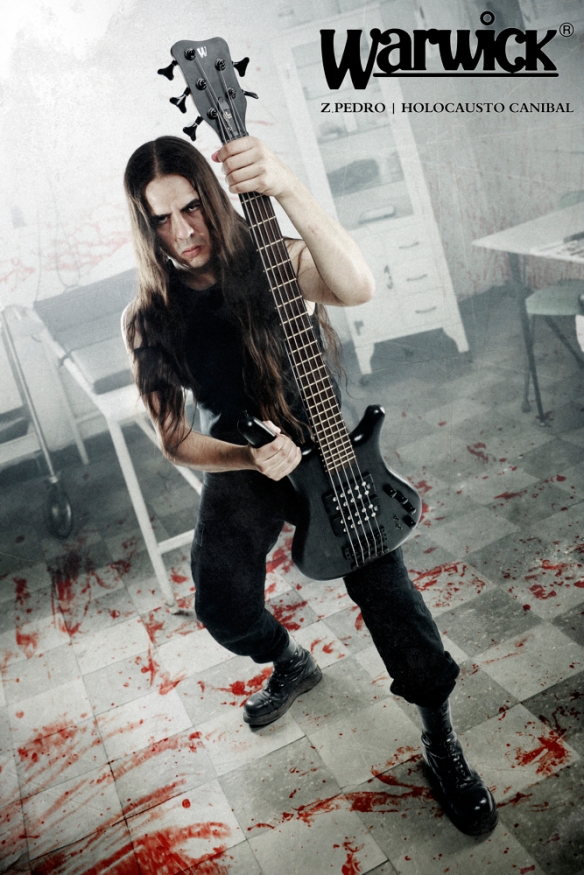 The use has proven that this bass is built to grind and blow your ears.

Z.Pedro says: “This and all Warwick basses are beautifully made and produced. This bass is no exception to the rule!
The Double Buck is made exquisitely. One look at it and there is no doubt that the finest craftspersons have put forth their best effort to design a beautiful product that one will delight in owning and cherish for as long as they own it.
The tuners on this bass are solid as a rock. They are custom made by Warwick.
The sonic possibilities that this bass bring are varied and completely unique. While other basses have similar double humbucker designs none of them seem to be as thick or as full as this bass.
The double humbucking MEC Pickups put this instrument in a class of it’s own.
In addition to the massive pickups and beautiful workmanship, this bass also sports it’s own universe of tonal controls and variances.
To add to the sonic flexibility given by the 3 band equalizer, this bass also offers dual coil taps, one for each pickup. These open up a whole other range of sonic possibilities!
Having a Warwick is a culmination of a long-awaited dream. Finally, it’s MINE!“ 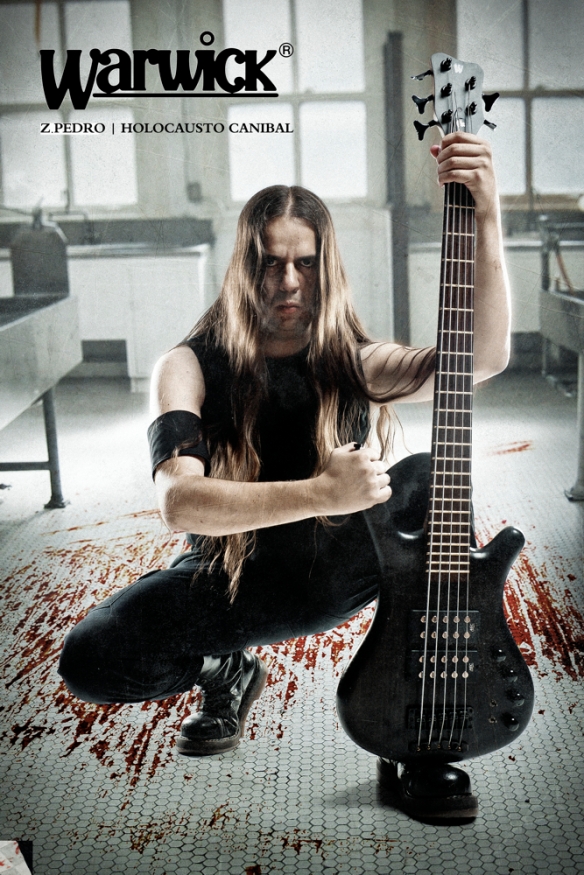 Z.Pedro says: “Paired up with my Mesa Boogie Big Block + Powerhouse, Warwick Corvette $$ DB5, the  not only sound amazing, they also look GOREgeous!”

Holocausto Canibal is deeply proud to be one of the first Mesa Boogie official endorsed artists in Portugal! 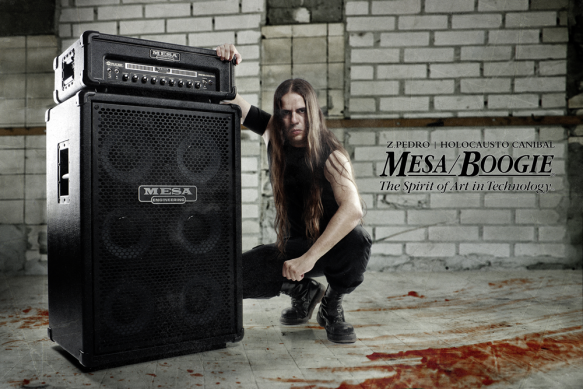 The weapons of choice are the bulldozer known as Big Block powered by a 6×10” Power House cabinet.
The use has proven that this stuff is built to grind and blow your ears.
Z.Pedro says: “Imagine the most thunderous power combined with sheer definition, bright and volume, blowing though a room like a giant roar that blows away anything and anyone in its path! This amp is so loud and projected that I can’t imagine ever needing the power to its maximum! Adding to the already stated state of the art
sound is one of the best overdrive effects ever. After trying for years a myriad of pedals and effects, the Big Block once again showed its versatility providing the best distortion for bass ever.” 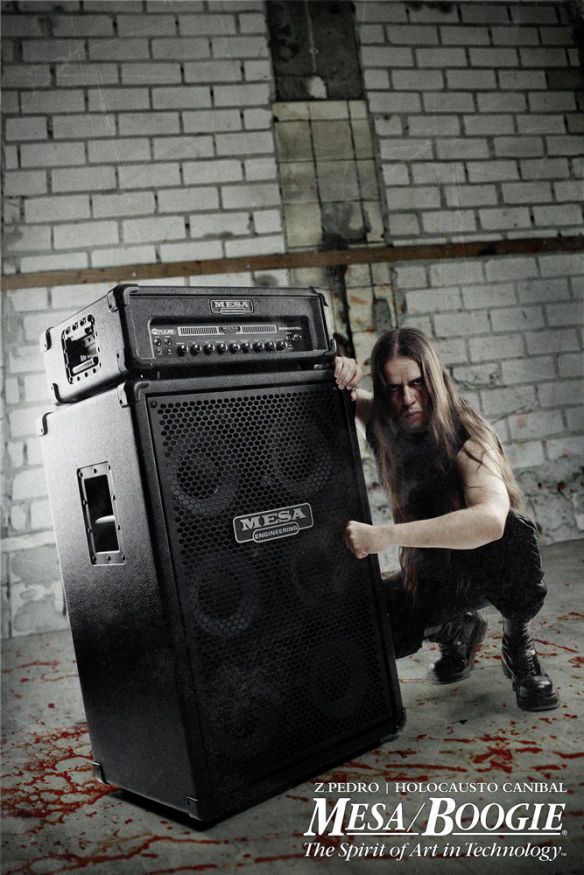 Since the amp doesn’t sound by itself, the Power House assures that all the monstrosity is taken care in a proper way. Not only it withstands the full 750 watts, its flawless and solid construction provides the support for stability, ease of use and transportation with the security that you can beat it ’till you faint, kick it, spit at it and still asks for more!
Of course that the looks of the whole stack are also staggering, the attention to the details is unbelievable and the sobriety is remarkable!
Z.Pedro says: “Paired up with my Warwick Corvette $$ DB5, the Big Block + Powerhouse not only sound amazing, they also look GOREgeous!” 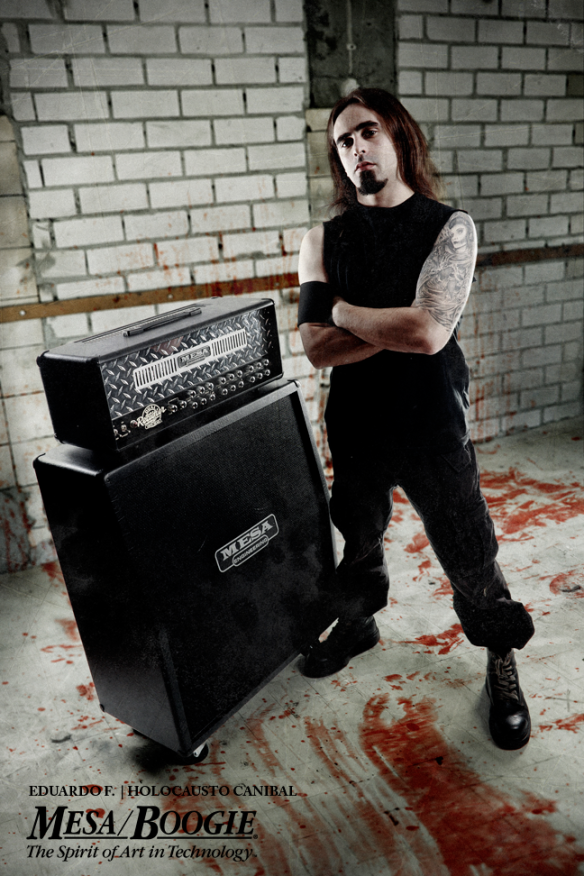 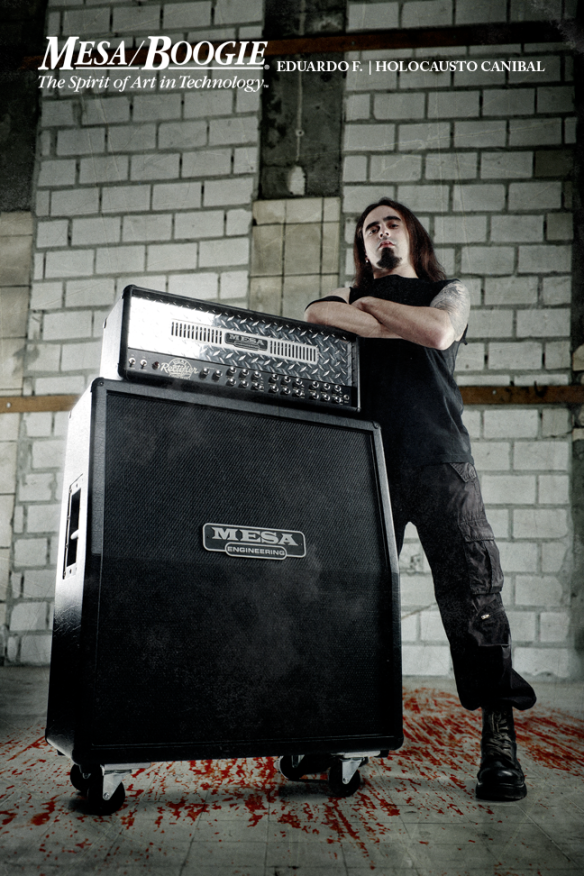 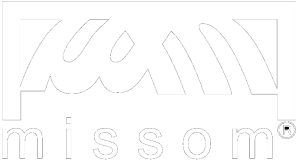 Diogo and Missom, a Portuguese brand of drumsticks have developed a model mainly destined to the extreme drummer, the BLASTOPHILIA model. This collaboration between drummer and artisan began last December and during this time by experimenting and focusing on the purpose to help the extreme drummer, the BLASTOPHILIA’s were born. These sticks are made of hickory and they stand out for their excellent performance in speed, rebound and volume. 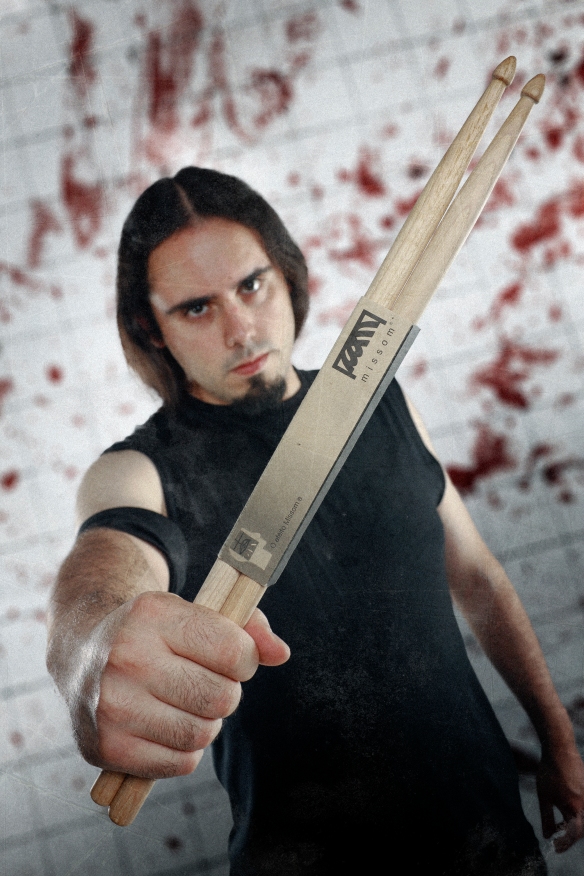 Inspired in the design of the standard 5A’s and some signature models from Missom itself, the drumstick is longer than usual, has a sharper tip for accurate beating during fast tempo sections, balance is weighted towards the tip for extra power and rebound, and are finished with bee wax. The logo is engraved by laser so it won’t fade with sweat or grinding.

This product will be available through our merchandise in concerts, through mail order and through Missom via their website on http://www.missom.com or through their official distribution. Contact us or them if you need more info on how to purchase a pair of BLASTOPHILIA’s. 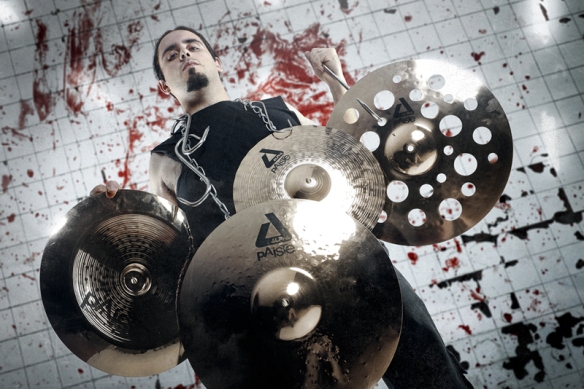 It’s with great honour and pride that we reveal another endorsement – the Paisteendorsement.
Diogo P. is one of the few portguese artists endorsed by this brand, a brand established in the worldwide market famous for their innovations regarding cymbals, alloys and many other ones in the cymbal and drums industry. Diogo is using a full set of the new improved and revamped Alpha series, a series that has been around since 1992 and it’s regarded with full respect.
Like any other Paiste cymbals, the Alpha line is known for its unbelievable sound and capability of suiting most of the music genres that are created today.
With the recent revamping, this cymbals came with new weights and sizes for the heavy music drummers, with and unbelievable volume, projection, durability and stunning brilliant looks. 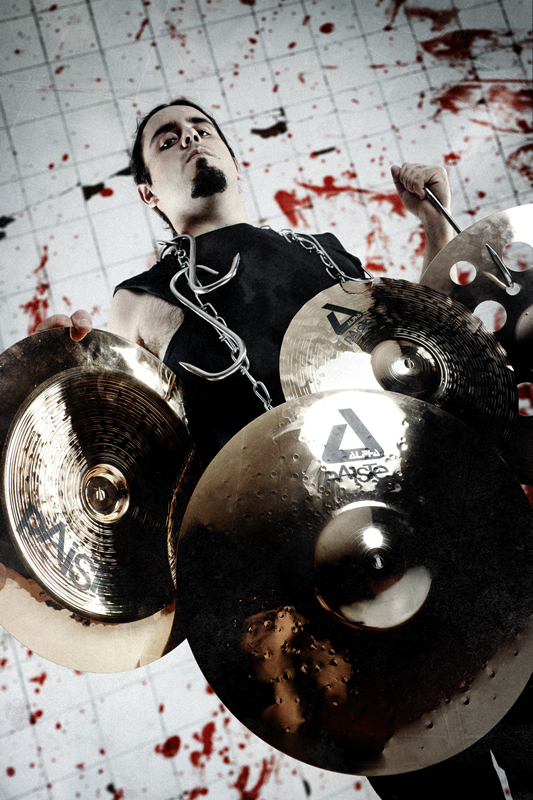 Diogo states: “I’ve used Paiste cymbals since the first day I played drums.
Curiously, I started with the old Alphas and 802′s, upgraded to Signatures, went to use other brands, but was never quite satisfied. I’ve changed my set up dozens of times and all the remaining cymbals kept being Paiste‘s.
I’ve tried almost every brand of cymbals in the market and for sure no other brand can give the power and definition that Paiste does. The stroke feeling, the tone, durability and all the other factors that make Paiste one of the industry leaders just can’t be found in any other brand, period! In studio they proved themselves more than suitable, in the pratice room they don’t sink in the wall of guitars and drums and live, well, if you’ve seen HC live in the past year, you’ll surely recognize that no matter how crappy the drum sound was, the cymbals always sounded loud, projected and balanced. Just don’t get fooled by the price tag or what others say, these cymbals are the thing for modern music and I can only think of replacing them with other Paiste cymbals!”