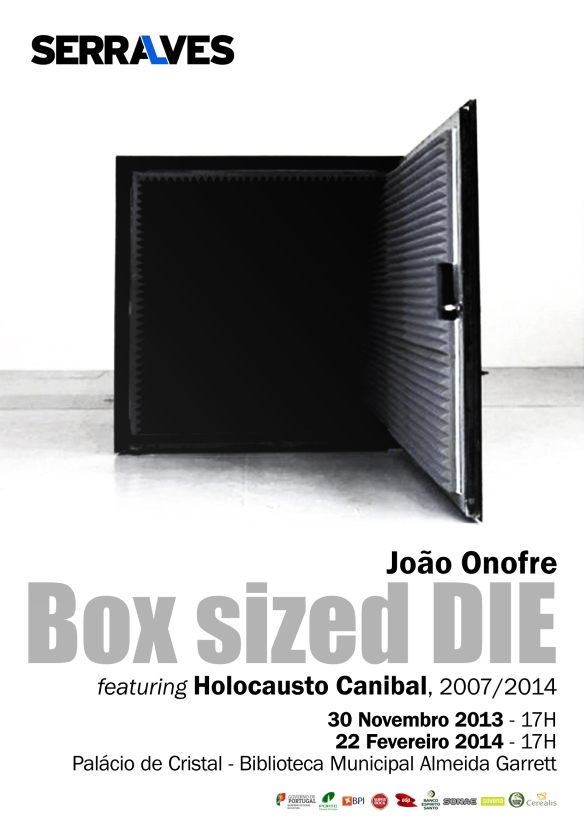 It’s with enormous pride and honour that we announce the invitation of Holocausto Canibal by Fundação de Serralves to be part of the performance “Box Sized Die” by the highly appraised artist João Onofre.
This performance will be part of the exhibition Habitars[s], with the trusteeship of Suzanne Cotter, Isabel Sousa Braga and João Silvério and includes works from the collections of Fundação de Serralves and Fundação Luso-Americana para o Desenvolvimento – FLAD. The performance will occur in two separate dates – the opening on 30th November 2013 by 5 pm and closing on 22nd February 2014 by 5 pm also. Both performances will take place in the premises of Palácio de Cristal, inside the municipal library Almeida Garret – Oporto.
“Box Sized Die” is a 183cm black metal cube padded with acoustic foam. Referencing a minimalist sculpture by Tony Smith, Onofre invites Holocausto Canibal to perform inside it. The work has no fixed duration, instead the band performs until they feel that the oxygen is running out and ends their set due to fear of asphyxiation.

Holocausto Canibal joins the roster of bands which already made their part in this performance, bands such as Konkhra, Dark Moon or Gorod.